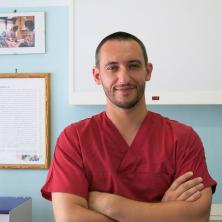 Dr. Ortalda graduated in Veterinary Medicine at University of Turin in 2001. From 2003 to 2013 he worked in his own private practice in Caluso (To - Italy) as general practicioner. In February 2009 he did one month externship in veterinary dermatology at the Universitat Autonoma de Barcelona, College of Veterinary Medicine under the supervision of Dr. Lluis Ferrer, Diplomate ECVD. In February 2012 he started his residency in Veterinary Dermatology under the supervision of Drs. Chiara Noli and Silvia Colombo, both ECVD diplomates. As part of his training, Dr. Ortalda spend some time in the parasitology department at the University of Turin - College of veterinary medicine under the supervision of Dr. Andrea Peano. As part of his training he also performes lectures in National and International meetings. In February 2016 Dr. Ortalda completed his residency program and in July 2018 obtained the certification of Diplomate ECVD.

Get the standard residency programme, supervised training, post-graduate education and experience in the science and practice of veterinary dermatology, encompassing clinical dermatology, dermatohistopathology, and the relevant basic and applied sciences.